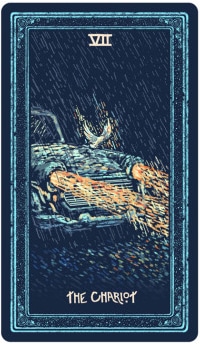 from the Prisma Visions Tarot

From May 2019 until May 2020 I have been and will be in my Chariot year. If you’re unfamiliar with what this means, think: numerology and tarot had a baby then Google “what’s my tarot card personal year.”

Right now I’m just about past the peak of my Chariot year, which has me antsy to get onto my Strength year, which sounds much more satisfying. But I’m not quite there yet. And, to be fair, my Chariot year has yielded quite a lot of important changes and results, many of which have been entirely orchestrated and executed by yours truly…so I guess I’m okay with sticking around in Chariot energy for a few more months.

So, what’s a Chariot year supposed to be like?

Well I chose the image to the right because that’s my favorite deck of all time, but also because I like the feeling of this imagery much more than the traditional. Headlights through the storm, the grace of a white dove and all that symbolizes guiding you home.

This year, especially, has been a homecoming for me. I’ve gone and fallen in love with and begun cohabitating with a wonderful unicorn of a man, which is in no small part the result of my intentional healing of many heart wounds. I’ve returned to my spiritual roots and re-embraced the magic I so believed in the majority of my life, but lost sight of as I lost sight of my own authentic Self. I have gotten a fucking grip on my mental health, my physical health, and my over-all well being as a result of finally learning how to put my needs first without any remorse. And I have finally come to a place where I can acknowledge my own wisdom and authority on certain topics that are dear to me, while remaining open to learning.

The more traditional imagery of a man holding the reins over two beasts (horses or sphinxes or whatever your deck might show) is not the vibe I generally embrace in my life, but I suppose it must be addressed.

There is a severity to this card that I’ve never liked, but that’s part of what I have had to acknowledge in myself over this year. I am a cruel mistress to my self. I am a divided force. I have whipped my horses to the point of exhaustion, to the point of abuse, to the point of the longest and most impassable writer’s block I have ever dealt with.

I’ve been doing a lot of shadow work this year, in the Jungian sense of the word as well as the occult. This means not only uncovering those parts of myself which I am unconscious of because I have decided they were “wrong,” but also re-examining them, figuring out where the judgement of those aspects came from, and whether or not I still agreed with it. Once I’ve brought an aspect to light, however, it’s hard to see whether or not it was ever a shadow aspect.

My perfectionism is one of those aspects. I was unaware that I was a perfectionist until I hit my 30s. No one looks at me and thinks “Yup, real type A right there. Total perfectionist.” I am messy. I don’t even brush my hair daily (with curly-ish hair you’re not supposed to brush it with anything but your fingers) and cannot be bothered with blow drying or any of that. My clothes are comfortable first, fashionable second. My house gets cleaned in spurts, and if I didn’t have a Roomba there would be fur tumbleweeds blowing through my living room. I was barely a merit roll student in high school and have literally never studied for any test in my life (excluding vocabulary quizes).

You get what I’m saying.

BUT when it comes to the things I do think are important, like creativity and art and writing, I have a gross distortion of my priorities. “If I can’t do it perfectly I won’t do it at all” is essentially what it comes down to on an emotional level. I know this doesn’t make sense–I know practice is essential, failure is a part of the process, perfection is impossible in subjective realms–but the fear is real. It’s hidden beneath layers and layers of justifications and anxiety and a false pretense of self protection, but it is very, very real.

And it has been incapacitating.

The Chariot is not a card that necessarily means one must address their own perfectionism, but for me, the representation of mastery over self, of domination through will power, is exactly the toxic imbalance I have been trying to address for years. And this year, especially, has been massive for me as far as finally confronting and changing those things.

The essence of the Chariot distilled down to a few words is: control, willpower, success, action, determination. All of those things have been integral to my recovery from my self-inflicted abuse. Determination to heal. Taking the actions necessary to heal. Giving up control. Giving power back to my emotions instead of keeping power solely for my will. These things, I believe, have led to my overall progress in my own healing.

There is some imagery in the more traditional cards, however, that can’t be ignored: the stars over the head; the castle in the background (are we coming or going?); the black and the white. These are easy to cast meaning on, but what really piques my interest is the image of two figures before a single figure, as we also see in the Hierophant (V), the Lovers (VI), the Devil (XV), and debatably the Moon (XVIII).

The Hierophant and the Lovers come right before the Chariot. For the Hierophant, two adepts or seekers kneel before a wise man. This card represesnt tradition, conformity, institutions; for the Lovers, an Adam and Eve type couple stand beneath an angel, to represent harmony, relationships, alignment with values. The Chariot is followed by Strength, which as you may know is a card that usually depicts a woman with her hand on a lion’s head or muzzle.

We go from the influence of the authority figure, to divine power, to self mastery, and move into something quite feminine and un-masterful, something yielding and powerful, something animalistic and tame at the same time. The Chariot is the realization of all the power of the wisdom that has been gathered thus far. Strength is the transmutation of that wisdom into the power of the heart: the wild heart, the wounded heart, the tame heart. All the hearts within your heart. The core of your courage. The core of your Self.

Anyway, that was a bit of a tangent…I’m still in my Chariot year so I can’t be getting too ahead of myself in anticipation for my Strength year. There is still a lot of work to be done, a lot of healing and self-seeking and uncovering. But I have made the time for it, put in the energy, and faced a lot of the difficult things that needed to be faced.

I am ready willing and able to do the work of self realization, self healing, self mastery-by-self-awareness and self-care. It has been a long and difficult road, but oh so worth the effort, and even the pain.

I look forward to what the last half of my Chariot year will yield.

What tarot year are you currently in, my friends?

A life-long witch and storyteller. View all posts by therunciblewitch